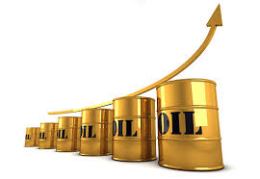 Another effect of a long and cold winter is invariably the rising cost of energy. Energy bills get hit with a double whammy in a cold winter. First, homes use more energy for heating purposes because of the cold and because we are home more often and secondly the cost of the energy we use goes up because of higher demand. Thus after a nice respite with lower energy costs which helped the economy last year, we start this year with oil prices hitting a benchmark of $100 per gallon in the middle of February with natural gas prices rising as well. The next question is–will this hurt the economy?

When consumers spend more on energy costs, this leaves less discretionary income to spend elsewhere. So it is not surprising that we saw a weak report on retail sales released recently. We should also point out that more energy used by homes also increases economic output and this will factor in the first quarter numbers as well. However, it is the cold spurring higher energy prices–not stronger economic growth. The cold winter will end soon. This means that higher energy prices could be a temporary phenomenon.

Or, if the economy is bolstered by latent demand after the long and cold winter, these levels could be the new normal. Energy costs affect more than consumer spending — they affect consumer trends as well. For example, higher energy costs spur housing sales closer to the center of cities versus the far out suburbs. This is part of a trend that has been occurring over the past decade. Thus, the cost of oil and gas bears watching even when we are not at the pump enjoying the better weather ahead. Meanwhile we will see economic reports this week covering consumer confidence, personal income and spending, as well as pending and new home sales as we approach another wave of jobs data next week.

The Markets. Rates rose moderately for the second straight week. Freddie Mac announced that for the week ending February 20, 30-year fixed rates increased to 4.33% from 4.28% the week before. The average for 15-year loans was up slightly to 3.35%. Adjustable rates rose slightly as well with the average for one-year adjustables rising to 2.57% and five-year adjustables increasing to 3.08%. A year ago 30-year fixed rates were at 3.56%. Attributed to Frank Nothaft, vice president and chief economist, Freddie Mac — “Rates on home loans crept up further following the uptick in the 10-year Treasury yield as minutes of the Federal Reserve’s last meeting indicated little possibility of a pause in the central bank’s reduction of bond purchases. Housing starts in January fell 16 percent to a seasonally adjusted annual rate of 888,000 units, below consensus forecast. Permits were at a seasonally adjusted annual rate of 937,000 in January, also below consensus.”  Rates indicated do not include fees and points and are provided for evidence of trends only. They should not be used for comparison purposes.

Even though new federal rules for home loans kicked in this year, and lenders’ standards remain high, Americans are increasingly likely to think it’s “easy” to get a home loan, according to a report released recently. Last month 52% of respondents to a survey from federally controlled mortgage buyer Fannie Mae said they thought it would be “easy” to get a home loan today. That share was a record-high for the series, which goes back to mid-2010. Fannie’s survey polls 1,000 American adults each month. January’s result should be good news for housing-market observers who have been concerned about the impact of new rules, along with rising rates, on demand. It seems that at least some would-be borrowers aren’t letting an evolving marketplace get them too down. Indeed, 70% of Fannie’s respondents said in January that they would buy a home if they were to move, matching a series high hit in October. While Fannie’s results may be a bit surprising, recent data from the Federal Reserve signaled that some large banks are easing standards for prime home mortgages. Source: Market Watch

The housing market is heating up, yet many house hunters are not prepared to take on the biggest purchases of their lives. When it comes to home loans, homebuyers answered basic questions about terms, how to choose a lender and financing wrong nearly one-third of the time, according to an April survey of more than 1,000 current and prospective homeowners by real estate website Zillow. Among the survey’s findings, 31% of buyers don’t think it’s possible to get a home loan for less than 5% down; 34% don’t know what the term “annual percentage rate” (APR) means and one in four believe you must close with the lender that pre-approves your home loan. And 24% of buyers believe the best deals are available through the banks where they currently have their savings and checking accounts, but often competing lenders can undercut those banks by large margins. “If a homebuyer can lower their interest rate by even half a percentage point, they can not only increase their purchasing power, but save thousands of dollars over the life of the loan,” said Lantz. Many house hunters go shopping with financing in place because it enables them to act more quickly if they see a home they want. But 26% of buyers believe that once they’re pre-approved, they’re obligated to close the deal with those loans, according to the survey. In reality, there’s no obligation. If buyers see better terms available they should take them. Existing homeowners can also be guilty of ignorance. Some 20% of homeowners surveyed didn’t know that underwater loans — those in which borrowers owe more than their homes are worth — can be refinanced into lower rate loans. Finally, the survey found that nearly a third of homeowners are unaware that if they go through a foreclosure or short sale, they may not have to wait the full seven years it takes for their credit score to recover and they can buy a home again. In reality, some homeowners who do short sales can obtain financing to buy another home in as little as two years. Source: CNN/Money

Builders are expected to increase new-home production in 2014, but the sector continues to grapple with several challenges that could hinder its progress, economists said at the National Association of Home Builders International Builders’ Show this week in Las Vegas. “Consumers are back, pent-up demand is emerging, there is a growing need for new construction, distressed sales are diminishing, and builders see it,” says David Crowe, NAHB’s chief economist. However, builders continue to face rising costs for building materials, difficulties in obtaining appraisals that reflect builders’ prices, and limited availability in labor and developed lots, Crowe says. Borrowing costs will likely inch higher this year since rates are expected to climb as the Fed begins to taper its $85 billion per month bond-buying stimulus program. Still, “regarding rates, we’ve gone from dirt cheap to cheap, and I think we will see a gradual rise of about a half a percentage point to 5 percent in 2014,” says Frank Nothaft, Freddie Mac’s chief economist. Even then, he adds, “most markets will remain quite affordable.” New-home sales are averaging 8.7 percent of total home sales – just barely half the historical average of 16.1 percent, according to NAHB. Crowe projects 1.15 million total housing starts in 2014, up nearly 25 percent from the 2013 total of 928,000 units. Single-family production is expected to increase 32 percent in 2014 to 822,000 units, and then rise an additional 41 percent to 1.16 million units in 2015. Source: NAHB